Hi...although its been a busy time here sorting things for Mum's funeral next week..I've been hopping around checking out your gorgeous creations for the past few days..and I'm getting itchy fingers...lol..I want to make...!!..I tidied my craft room the other day just to keep busy...so when I sat at my desk this afternoon I didn't really want to mess it up..lol...but as I sat thumbing through this months issue of Craft Stamper mag..I really had an urge to get messy.  I've have a couple of small canvas boards sitting waiting to be transformed...I've seen loads in blogland a really wanted to have a go...so here is my very first canvas board... 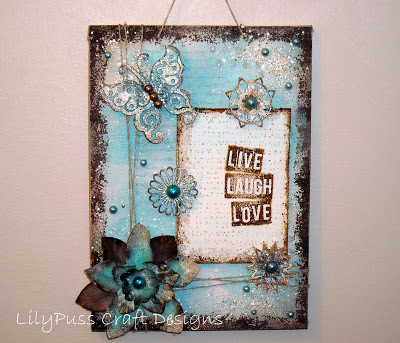 sorry about the dingy pic..its very cloudy here this afternoon... anyway..I used distress inks and stains...loads of different stamps..I used the inks on the flowers and the butterfly and little shaped flowers are wooden embellies I found at the Craft Barn a while back.  I used probably too much Frantage too...lol...I thoroughly enjoyed doing this and I know I'm well and truly hooked...so there will be more to come...lol...I'm going to hang this in my downstairs loo..
Think I might have a colouring evening...Tilda is waving at me...lol...
Happy Crafting
Hugs
Jan...xxx
Posted by LilyPuss Cards at 17:49 4 comments: 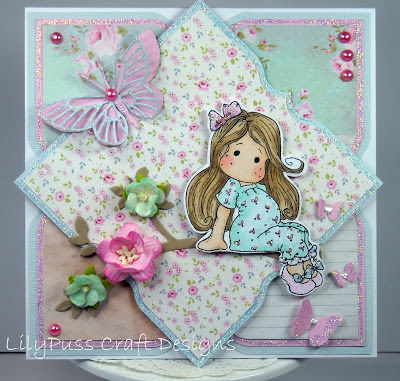 Thank you all again for your lovely comments regarding my Mum..I so do appreciate them all...
Happy Crafting
Hugs (boy, I could do with one)
Jan.....xxxx
Posted by LilyPuss Cards at 20:41 5 comments:

I am very sad to say that my Mum passed away on Friday evening.  As you know she has been suffering from Alzheimer's for a while and she has been in a nursing home since January 2012,  I got a call late Friday evening to say I should come.  I didn't get there in time.  They tell me that she had a massive stroke and it was very quick, which was good.  My first words when I saw her was what a relief that she wasn't suffering anymore, Alzheimer's is such a cruel cruel disease.  We have watched our Mum deteriorate over the past months into someone who wasn't our Mum.  We last saw her on Thursday and she was as well as she could be and I managed to make her smile when I teased my sister about her shoes..( my sister had  surgery on her toe and she was wearing socks with sandals..not a good look Jacqui...lol...)...Anyway..I have some pics of my Mum..
According to the inscription on the back of this one she was about 2yrs with an uncle... 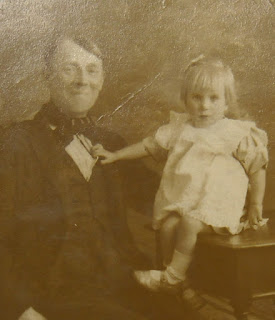 She is 18yrs in this one..My Dad carried this pic with him during the War. 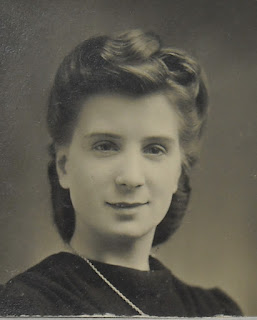 These were taken in the 60's I think she was mid thirties.. Such style....lol 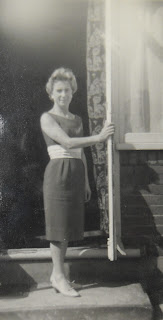 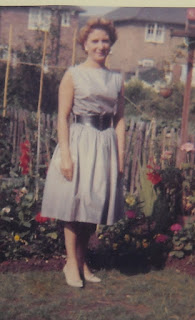 and here she is with my first Yorkie 'Poppy' 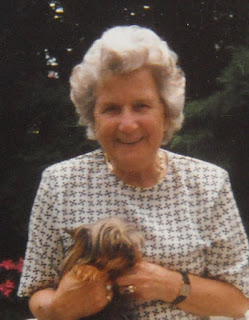 
Edit:..I have to tell you this...since Mum has been in the nursing home we have had so many issues about her care..mainly about not combing her hair..or her bed not being as comfy as we would like it to be...or them not noticing she didn't have her hearing aid and not searching properly for it.  I've lost count of the heated exchanges I had with the (male) manager there..and we also made a formal complaint to the head office.  We had assurances that things are changing ..and we had heard that the manager was on his final warning to pull up his socks (we weren't the only family that had made complaints)..well today he surpassed himself...I had to call the home to see what I need to do now that Mum has passed away....he didn't know she had died!!!!!!..'oh no one left a note on my desk' he said..well I went ballistic!!!! He is in charge of the home...he is suppose to be looking after the residents surely that when he starts work after the weekend he makes his business to find out what has occurred in his absence....I have spoken to his manager tonight...she called me...and she will investigate and get back to me later in the week.  Don't we have enough to deal with?? I swear if he was in front of me I would have swung for him!!
Thank you all for your lovely comments, they have given me and my family great comfort.
Jan...xxxx

Stayed in Bed All Morning Just to Pass the Time...

..yes it sounds like a good line for a song....lol...but it wasnt just to pass the time..its 'cos I now have a full blown cold and feel really awful..ugh!!!...and to make it worse its been a glorious sunny day here...what a waste...anyway..heres another Tilda.... 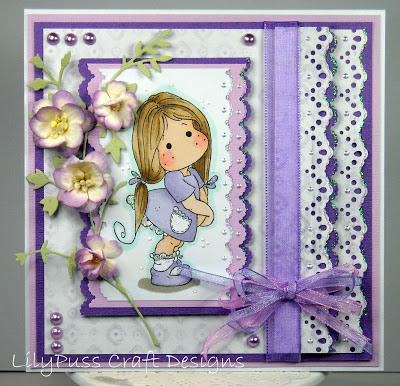 Again she is from the new collection...
I hope to be up and about tomorrow...I have gardening to do...
Happy Crafting
Hugs
Jan...xxx
Posted by LilyPuss Cards at 20:20 4 comments:

Hi Happy Thursday!!...hope you're enjoying the sunshine...here's another Sweet Tilda..yes I've been treating myself to the new collection...well it would have been rude not to...lol... 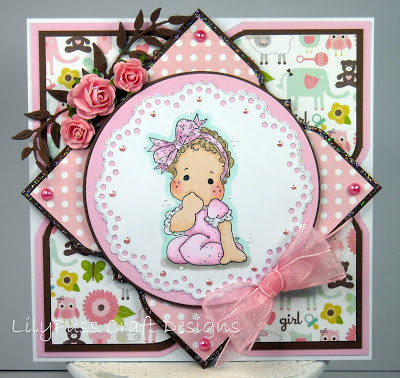 This is baby Tilda...awwww ...so cute...
I wanted to take advantage of the sunshine and try and get my front garden in order tomorrow..but I think I've gone and got me a cold..ugh!! so I'm having an early night with Mr Lemsip with the hope I can zap it before its starts....wish me luck..lol..
Have a great evening
Hugs
Jan...xxx
Posted by LilyPuss Cards at 19:36 4 comments:

Hi Guys...yes finally I'm back in card making mode and have a sweet Tilda to share...I use lovely bright colours to relect the lovely bright sunshine we are having at the moment. 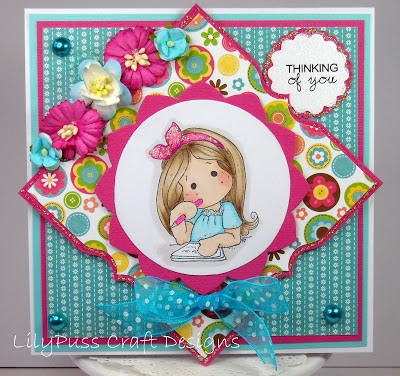 I havent had a good time of late..lets just say I'm pleased that May has been and gone...I have a issue to be solved at the moment but when I can I'll tell you about it.
Anyway..I have a few more cards to share so do keep an eye...I'll be back..lol..
Have a lovely evening
Hugs
Jan...xxx
Posted by LilyPuss Cards at 19:31 2 comments: 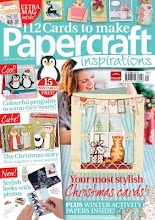 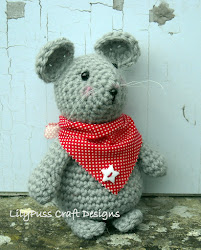 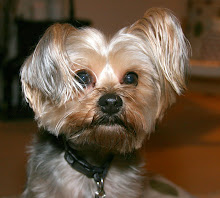 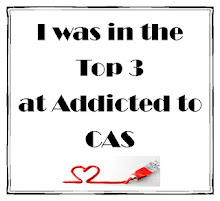 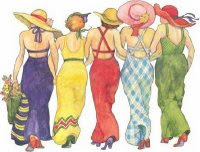